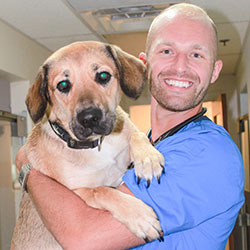 Fascinated by wildlife and the vast differences within species, combined with the unconditional love of companion animals, Dr. Neumann states, “how could you not love animals?” From the constant appreciation they provide even when they’re clearly uncomfortable and in pain, his love of animals continues to grow.

Dr. Neumann has always owned black-labs; they are his favorite breed and color of dog. In 2013, while completing his residency, he met a black lab with bone cancer. Things were not looking good for the dog so they tried switching him to a new treatment. The owners were concerned because they were traveling out of town and they were unable to care for the dog. Dr. Neumann offered to take the dog to his home and care for him while they were gone. The two spent seven days together over Christmas vacation. Dr. Neumann treated him around the clock until the owners returned. The lab passed away about two months later.

Dr. Neumann began his career in medicine and science then decided to go into veterinary medicine as he found it more interesting and challenging. He loves working with animals and has a deep interest in each human-animal bond. He feels that pets are family members and he strives to treat each as if they were his own.

Dr. Neumann joined the team of medical oncologists at SEVO-Med in August 2015.

Dr. Neumann is from Chicago where he still has a large family. He loves spending time outdoors, kayaking, biking, playing beach volleyball and reading.